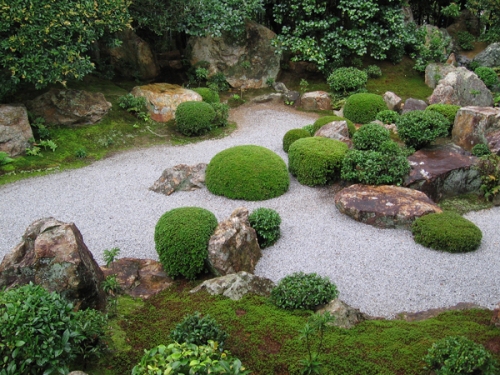 It is estimated that the typical suburban lawn consumes 10,000 gallons of water above and beyond rainwater each year.     ~U.S. Geological Survey

There are a variety of water-efficient gardening and landscape designs.  One of the oldest is the Japanese rock garden or dry landscape garden, often called a Zen garden, that dates back to the 11th century.  Karesansui suggests mountains and water using only stones, sand or gravel and, occasionally, plants.

The name translates literally as dry mountain water. Influenced by Zen Buddhism, the term indicates a stone arrangement in a part of the garden without water. A karesansui garden is a living work of art in which the plants and trees are ever-changing with the seasons.

Unlike other traditional gardens, there is no water present in karesansui gardens. Using neither ponds nor streams, it makes symbolic representations of natural landscapes using stone arrangements, white sand, moss and pruned trees. There is gravel or sand, raked or not raked, that symbolizes sea, ocean, rivers or lakes. Water is symbolized both by the arrangements of rock forms to create a dry waterfall and by patterns raked into sand to create a dry stream. Though each garden is different in its composition, they mostly use rock groupings and shrubs to represent a classic scene of mountains, valleys and waterfalls inspired originally from Chinese, and later Japanese, landscape paintings.

These gardens require careful maintenance from those skilled in the art of training and pruning. Part of that art is to keep the garden almost still, like a painting…and like paintings, the gardens are meant to be viewed from a single, seated perspective.

In addition to water conservation in gardens and landscaped areas, karesansui adds artistic and spiritual elements that evoke nature, balance, peace, and serenity.

“The clearest way into the universe is through a forest wilderness.”
– John Muir, Naturalist

Waipoli Road begins just southeast of Kula, Maui, off the Kekaulike Highway (377) at mile marker 9.  It takes you up the slope of Haleakalā, to the summit ridge of Maui’s massive 10,023 foot dormant volcano.

The ten mile road is steep, bumpy, and dominated by switchback turns. Its surface devolves from macadam  to single lane paved, to gravel then graded dirt.  At times it is so treacherous the forest service will block off the last 2 unpaved miles leading to the crater.

About 6,200 feet above sea level, situated in the magnificent 21,000 acre Kula Forest Reserve, is Polipoli Springs State Park. Amidst towering trees this Upcountry park offers nearly ten acres of recreational area and amazing views of the Maui lowlands and the neighboring islands of Lana‘i and Kaho‘olawe. 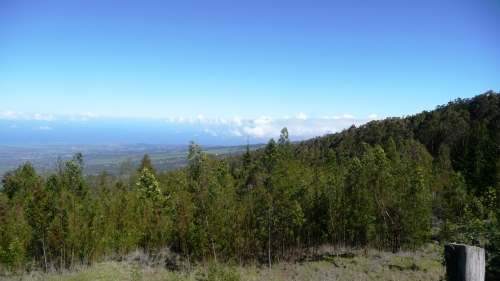 Located in the cloud line thousands of feet above sea level and often fog-bound Polipoli includes a maze of crisscrossing hiking and biking trails that require you to be alert to “false trails.” For many Mauians, the reserve’s greatest attractions are wild pig and pheasant hunting and, between May and July, picking tasty Methley Plums.

Dense with exotic native Hawaiian trees such as plum, cypress, sugi, and ash, Polipoli is noted for its mature forest of redwoods, some standing over 100 feet tall and nearly six feet wide at the base!

From January 23 to February 5, 2007, a wildfire burned about 2,300 acres of forested lands within Kula Forest Reserve. In terms of size and intensity, this wildland fire event was one of the most devastating to have occurred in Hawaii for many decades.

The burn area was dominated by mature closed canopy forest composed primarily of pines, cypresses, and redwoods. Approximately 1,800 acres were so badly burned there was little remaining live vegetation. Further damage from a severe storm in December, 2007, closed the area for several months while the State, with the help of community volunteers, cleared and secured trails, seeded over 1,250 acres of mountainside with grass mix, and planted 132,572 tree seedlings.

It will take decades to completely erase the fire and storm damage, but the aggressive efforts undertaken by the State have already returned life to the affected areas. The Kula Reserve Forest remains a Maui treasure.

Maui’s Waipoli Road truly transports you to another world!

(Advisory: Polipoli Spring State Park is remote, wet, and cold. It rains frequently. You need rain gear and warm clothing. And remember that hikers share the trails with mountain bikers.)

“Oh Maui, Sun is a great god!  No one has gone near him and lived,” Hina warned.  “Then I shall be the first!” Maui boasted. “I shall make him promise to go more slowly.” ~Maui speaking with his mother, the goddess Hina

The young demigod Maui  listened to the fishermen and farmers who complained that the days were too short for working.  He heard his mother, the goddess Hina,  protest that there wasn’t enough time to dry her tapa cloths. 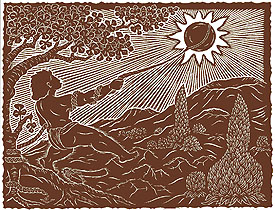 Disturbed that the days were too short and wondering why the Sun god crossed the sky so quickly,  Maui planned his quest.  One night he hid on the high slope.  He anchored his rope to a wili-wili tree and stood strong among hinahina plants (found only at mount Haleakala on the island of Maui) until the Sun god rose up. Lasooing Sun’s legs (rays) he asked him to promise to slow down. When Sun refused Maui began to break his legs, one at a time.

From then on, for part of the year Sun traveled at his usual speed. The days were short and night came quickly.  It was the season of Ho’oilo.  The time to catch akule.

The rest of the year, Sun slowed down as he had promised. The days were long and filled with sunshine.  It was the season of Kau.  The time to catch opelu.