“The clearest way into the universe is through a forest wilderness.”
– John Muir, Naturalist

Waipoli Road begins just southeast of Kula, Maui, off the Kekaulike Highway (377) at mile marker 9.  It takes you up the slope of Haleakalā, to the summit ridge of Maui’s massive 10,023 foot dormant volcano.

The ten mile road is steep, bumpy, and dominated by switchback turns. Its surface devolves from macadam  to single lane paved, to gravel then graded dirt.  At times it is so treacherous the forest service will block off the last 2 unpaved miles leading to the crater.

About 6,200 feet above sea level, situated in the magnificent 21,000 acre Kula Forest Reserve, is Polipoli Springs State Park. Amidst towering trees this Upcountry park offers nearly ten acres of recreational area and amazing views of the Maui lowlands and the neighboring islands of Lana‘i and Kaho‘olawe.

Located in the cloud line thousands of feet above sea level and often fog-bound Polipoli includes a maze of crisscrossing hiking and biking trails that require you to be alert to “false trails.” For many Mauians, the reserve’s greatest attractions are wild pig and pheasant hunting and, between May and July, picking tasty Methley Plums.

Dense with exotic native Hawaiian trees such as plum, cypress, sugi, and ash, Polipoli is noted for its mature forest of redwoods, some standing over 100 feet tall and nearly six feet wide at the base!

From January 23 to February 5, 2007, a wildfire burned about 2,300 acres of forested lands within Kula Forest Reserve. In terms of size and intensity, this wildland fire event was one of the most devastating to have occurred in Hawaii for many decades.

The burn area was dominated by mature closed canopy forest composed primarily of pines, cypresses, and redwoods. Approximately 1,800 acres were so badly burned there was little remaining live vegetation. Further damage from a severe storm in December, 2007, closed the area for several months while the State, with the help of community volunteers, cleared and secured trails, seeded over 1,250 acres of mountainside with grass mix, and planted 132,572 tree seedlings. 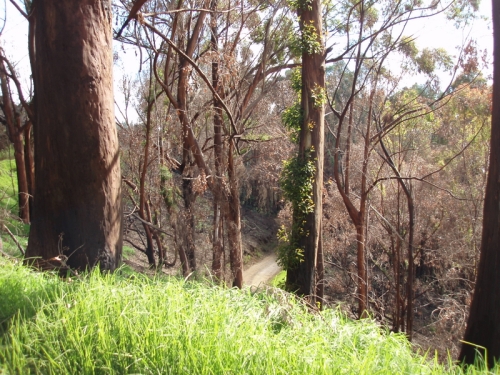 It will take decades to completely erase the fire and storm damage, but the aggressive efforts undertaken by the State have already returned life to the affected areas. The Kula Reserve Forest remains a Maui treasure.

Maui’s Waipoli Road truly transports you to another world!

(Advisory: Polipoli Spring State Park is remote, wet, and cold. It rains frequently. You need rain gear and warm clothing. And remember that hikers share the trails with mountain bikers.)