Maui County was the first to amend its building code to allow for the construction of indigenous Hawaiian structures.  These rules were the first of their kind in the state and have served as a guide for local governments.

Today, more than ever, the concept of sustainable design is in the forefront. It recognizes that human civilization is an integral part of the natural world and that nature must be preserved and perpetuated if the human community itself is to survive.

sustainable design holds that future technologies must function primarily within bioregional patterns and scales. They must maintain biological diversity and environmental integrity, contribute to the health of air, water, and soils, incorporate design and construction that reflect bioregional conditions, and reduce the impacts of human use.

For centuries, traditional Hawaiian structures had thatched roofs made of pili grass.

The most important building in ancient Hawaiian civilization was the home of the chief. The Hale Ali’i could be found on a hill, with a stone foundation to symbolize the chief’s high standing within the community. The interior of the Hale Ali’i  was covered with leaves, and the floor with woven mats. Nearby, stood the Hale Papa’a, serving as a storage room, where the chief kept his most valuable possessions. In this home, the chief (ali’i) would hold meetings. Women and children could not enter this building.

Many ancient Hawaiian structures held cultural importance. The Halau, or house of instruction, was a place of instruction, where young native Hawaiians learned the art of the hula and other aspects of Hawaiian culture. In the Hale Pahu, or drum house, drums and other instruments needed for hula dances were stored. 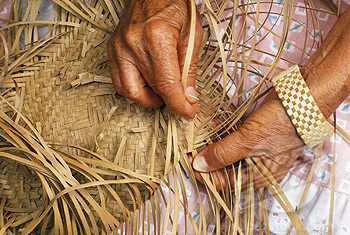 In the Hale Ulana, or weaving house, women created mats, baskets, fans, and other items from dried leaves woven delicately together. Near the water, the Hale Wa’a, or canoe house, held canoes made from koa wood, or tropical mahogany. Closest to the shoreline, the Hale Lawai’a, or fishing house, provided space for fishermen to prepare their gear and nets.

While the chief lived in the Hale Ali’i, other Hawaiians lived in a much more modest Hale Noho. In this house, extended family members slept in a specific order under one roof. The traditional beds used by Hawaiians consisted of dried grass and leaves spread on the earth.  Mats places over the grass completed the bed.