This year the United Nations Educational, Scientific and Cultural Organization (UNESCO)  inscribed Papahānaumokuākea Marine National Monument as one of only 26 mixed (natural and cultural) World Heritage Sites in the world.  The inscription of this remote oceanic expanse is a win for the United States on its first nomination of a site in 15 years.

Papahānaumokuākea Marine National Monument covers an area of nearly 140,000 square miles, encompassing the islands and atolls of the Northwestern Hawaiian Islands — stretching some 1,200 miles northwest of Kaua’i — and the surrounding ocean.

“This inscription elevates Hawai‘i in the eyes of the world and underscores our responsibility to protect our culturally, naturally and spiritually significant places for future generations, as our ancestors would want,” said Haunani Apoliona, Chairperson of the Office of Hawaiian Affairs Board of Trustees. 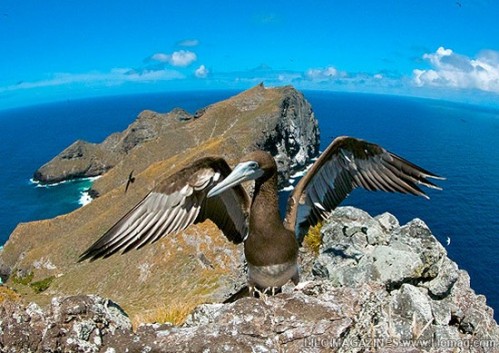 The near pristine remote reefs, islands, and waters of Papahānaumokuākea provide refuge and habitat for a wide array of threatened and endangered species and is one of the last predator-dominated coral reef ecosystems on the planet; manō (sharks) and ‘ulua (jacks) dominate the underwater landscape. The region also provides critical nesting and foraging grounds for 14 million seabirds making it the largest tropical seabird rookery in the world.

After 30 days at sea, NOAA Ship Hi`ialakai returned to Honolulu this past August with ground-breaking new discoveries on the marine life of Papahānaumokuākea Marine National Monument.  Foremost among these discoveries is the finding that deep coral reef fish communities, well below depths normally visited by scuba divers, are dominated by endemic fishes found only in Hawai‘i.

“Unique Hawaiian endemic species comprise over 90% of the fish communities at these depths,” said Dr. Randy Kosaki, Chief Scientist and one of the technical divers on the cruise. “This is the highest level of endemism recorded in any marine ecosystem on earth, and this discovery underscores the importance of the protected status brought to the Northwestern Hawaiian Islands ten years ago. These reefs are a global treasure trove of biodiversity.”

Papahānaumokuākea’s extensive coral reefs — truly the rainforests of the sea — are home to over 7,000 marine species, one quarter of which are found only in the Hawaiian Archipelago. Scientists have identified seven new species of bamboo coral in the deep waters of Papahānaumokuākea, six of which may represent entirely new genera.

“We found live, 4,000- year-old corals … meaning 4,000 years worth of information about what has been going on in the deep ocean interior.”  ~ Rob Dunbar, Stanford University