KALA: Hawaiian Money Before the Dollar

The Hawaiian Islands once issued their own currency and coinage under their own rulers.

Hawai’i’s first modern government was established in the early 19th century, but it wasn’t until 1847 that they established a modern treasury and issued currency.  Before this, Hawaiians relied on various plantation tokens and foreign coins.   The economy was so small it was not difficult to trade in this manner. 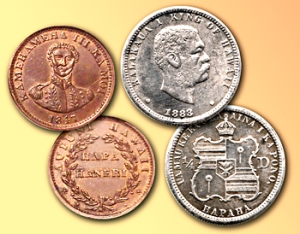 As the economy and population grew, it became more difficult to exchange disparate monies, so a new, local money was established.  The dala or dollar was the currency of Hawaii between 1847 and 1898.  It was equal to the US dollar and was divided into 100 keneta or cents.  The 1847 Kamehameha penny was the first coin issued by the Hawaiian government.    The penny was the smallest denomination with several coins in between paralelling the structure and value of the U.S. dollar of the time.  They were minted in copper and produced in small numbers by a private U.S. mint — just enough for the small population of the islands. 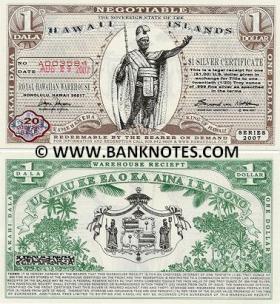 During his reign (1874-1891), King Kalakaua was committed to developing Hawai’i’s power in the South Pacific and bringing more income to his small nation.  He needed new money to improve his country’s economy.  The old coins were eliminated from circulation, and a new set of money was commissioned. The U.S. Mint (as it still does today for other countries) produced this new coinage for Hawaii, and in 1883 they came up with Hawaii’s four requested coins: 1 dollar, 1/2 dollar, 1/4 dollar, and 1/8 dollar.  Larger denominations were also produced as paper currency, up to a $500 bill, in the allegorical style of most Western Hemisphere money of the time.

In 1898, Hawai’i became a territory of the  United States, and eventually the U.S. dollar supplanted their local currency.  However, this wasn’t the end of special Hawaiian money.  In January 1942, one month after Pearl Harbor was bombed, the U.S. government fearing enemy invasion announced that “New Money” was on its way.

Specially imprinted notes became the only legal tender and had no value outside Hawai’i. The new money consisted of $1, $5, $10 and $20 denominations. Brown seals and serial numbers replaced the green and blue ones and the word HAWAII appeared twice on the front and once really big across the back. The ‘old’ money would no longer be legal tender in Hawai’i.

Due to citizen resistance, it took 27 months to complete the transition and to have the new money in circulation. The government appointed a special committee to dispose of some 200 million dollars of old money.  The enormous quantity of notes was hauled to the Aiea Sugar Mill on Oahu and incinerated.

Today, old Hawaiian coin and currency is  highly valued by collectors around the world.